Pseudothrombocytosis Due to Red Blood Cell Fragmentation in Haemoglobin-H Disease


Copyright © 2021 Haidary AM, et al. This is an open-access article distributed under the terms of the Creative Commons Attribution License, which permits unrestricted use, distribution, and reproduction in any medium, provided the original author and source are credited.

Red cell membrane in patients with haemoglobin H (Hb-H) disease and other haemoglobinopathies is rigid and thus red blood cells are fragmented during passage through narrow capillary beds, especially through the splenic sinusoids and the liver [1,2]. These fragments are frequently seen in peripheral blood films [2].

Automated blood cell counting systems, if not adequately calibrated then may report these red cell fragments as platelets. This pseudothrombocytosis can be confirmed either with manual platelet counting on a peripheral blood smear or using flow-cytometry mode, which is considered to be the gold standard for correct estimation of platelet count that uses RNA fluorescent dyes to count the true platelet values [3]. Here, we report a patient with Hb-H disease who exhibited an unusually high platelet count.

A 59-year-old lady with non-transfusion dependent Hb-H disease on regular follow up, was noted to have a very high platelet count, highest recorded value being 2158 × 109/L, during her clinic visits, as shown in Figure 1. Two months earlier the platelet count was 339 × 109/L, also shown in (Figure 1). The patient had no signs or symptoms related to hyper-viscosity, or any bleeding tendencies. On examination the patient had no hepatosplenomegaly. She was subsequently followed up at the haematology clinic 6 months apart. Two subsequent FBCs also showed platelet counts more than 2000 × 109/L. All the high values were obtained using the Impedance mode by a newly installed Sysmex XN3000, shown in Figure 1. A full blood picture was requested and showed aniso-poikilocytosis with numerous red blood cell fragmentation, with manual platelet count of 60-80 platelets per high power field (approximately equivalent to 300-400 × 109/L), as shown in (Figure 2). Finally, the FBC was repeated using the Sysmex XN3000 via optical mode with reticulocyte-platelet channel that showed a normal platelet count of 153 × 109/L, as shown in Figure 1. 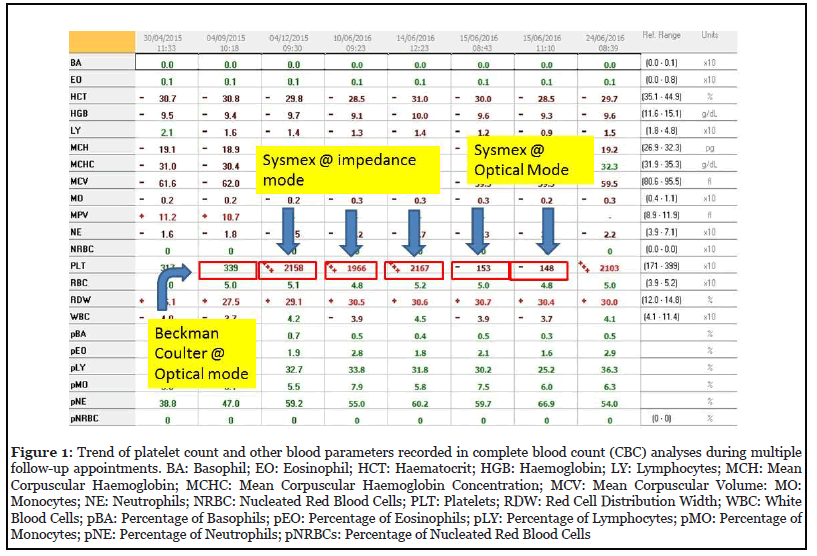 A conventional haematology analyzer uses two main principles for the estimation of an absolute blood cell count [4]. The first and oldest principle is the “Coulter’s impedance principle”. According to Coulter impedance principle, in a closed electrical circuit through a conducting fluid medium, an impedance is created when small particles such as blood cells pass through an aperture between the two electrodes. The impedance to the flow of charges between two electrodes is equivalent to the size of the particle, as shown in (Figure 3) [5]. The computer in a well calibrated analyzer will then count each impedance event as either red blood cell, leukocyte or platelet depending on the size of the particle. Working on the impedance principle, the analyzer needs to be well calibrated to avoid erroneous measurement of the counts, as shown in this case. Frequent troubleshooting of abnormal results and thus frequent calibration is the key to achieving best performance of a modern multiparameteric haematology analyzer [6,7].

The second principle is based on the principle of flowcytometry designated to optical reticulocyte and platelet Reticulocyte/platelet channels [8]. A Fluorescent dye that specifically binds to RNA component of the cells is used in this method [8]. It should be recalled that reticulocytes and platelets contain excess amounts of RNA material in their cytoplasm, the Reticulocyte/platelet channel is particularly specific and sensitive for accurate estimation of reticulocyte as well as platelet counts [8]. This is also a useful method to assess the immature platelet fraction, in patients with increased peripheral destruction of platelets [9].

In conclusion, laboratory personnel should be aware that analyzers that use the impedance principle might lead to spurious blood counts in a wide spectrum of blood disorders. When an unexpectedly high platelet count is encountered, the count should be confirmed using more accurate modalities, including manual count on a blood smear. Haematologic analyzers using impedance mode need to be properly calibrated to reduce the chances of getting abnormal results with normal actual counts.

AMH and SRN conceived the idea. SRN and AMH were the major contributor to the writing of the manuscript. AMH, RZA diagnosed the case. MA collected the data from hospital integrated laboratory management system (ILMS), AMH and SRN were the major contributors for critically revising the manuscript for important intellectual content. SRN and RZA have given expert opinion and final approval of the version to be published. All authors read and approved the final manuscript.

Authors received no funding for the writing.

Availability of Data and Materials

All the generated data are included in this article.

Ethical Approval and Consent to Participate

Written informed consent was obtained from patient’s legal guardian for publication of this case report and all the accompanying figures. A copy of the written consent shall be availed to the Editor-in-Chief of this journal.

The Authors declare that they have no competing interests.