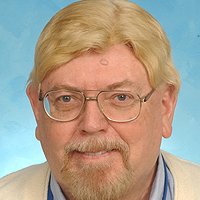 Department of Biochemistry and Molecular Pharmacology

After completion of graduate studies, Dr. Van Dyke joined Dr. Leroy Saxe and Dr. Richard Cenedella in the development of drug screening methods for malaria under a US Army contract in 1966. The culmination of this work was the first effective screening method to study the effects of antimalarial candidate drugs on growth of the malaria parasite via measurement of DNA and RNA synthesis. More than 10,000 possible anti-malarial drugs were screened and mefloquine and halofantrine eventually made it to the market for antimalarial treatment of humans. It was found that the building blocks for DNA and RNA of the parasite were utilized differently from each other. Purines of malarial parasites were salvaged from host purines while pyrimidines were synthesized de novo from simpler precursors by the parasite. These seminal observations are still be used almost 50 years later in automated drug screening with Plasmodium falciparum the deadliest of all the different strains of malaria.

Dr. Van Dyke has many USA and worldwide patents on malaria, cancer, HIV chemotherapy, vascular diseases, neurodegenerative diseases and other chronic diseases He has written 6 books for CRC press on a variety of subjects dealing with luminescence and pharmacology. He is a member or past member of American chemical society, National Association for Advancement of Science, Sigma Xi, Society of Pharmacology and Experimental Therapeutics (lifetime member), American society of Photobology, Who’s Who in The USA, Who’s Who in the Frontiers of Science, Kentucky Colonels etc.

Research is centered in two main areas: chemotherapy and inflammation. These studies include an examination of antimicrobial, antiviral, antimal, and anticancer drugs. Other research is involved with host defense systems and the drugs that affect them.