Copyright: © 2020 Terrazas DIR, et al. This is an open-access article distributed under the terms of the Creative Commons Attribution License, which permits unrestricted use, distribution, and reproduction in any medium, provided the original author and source are credited.

Introduction: Viral load and CD4 cell count are the main principal indicators about evolution of the disease by HIV. Stage of infection related clinical and inmmunological status.

Results: There was no significant difference in the CD4 cell count with p=0.272, in the initial viral load with p=0.653, and not in the infection stage with p=0.466, at admission, during the 10 years reviewed.

Conclusions: There was no statistically significant difference in the 3 variables, which suggests that the patients entered with the same clinical and immunological deterioration during the 10 years.

The human immunodeficiency virus (HIV) has caused one of the pandemics that has most affected the world population [1], and continues to be a serious problem, since to date it has not been possible to eradicate or prevent totally new cases. The World Health Organization (WHO) announced that in 2017, 36.9 million people were living with HIV worldwide, [2] and the National Center for the Prevention and Control of HIV and AIDS (CENSIDA) reported 164,074 cases at the end of 2018 in Mexico [3].

Infection with this virus has detrimental results in various aspects of the people directly affected, including the psychological, social, economic, immunological and clinical aspects.

HIV is a lentivirus of the retroviridae family [4], whose main result in the patient is the gradual depletion of CD4+ lymphocytes, because it causes a decrease in their production and facilitates their destruction [5].

David Ho in 1995, inferred that viral load and CD4+ lymphocyte count are the main indicators of the evolution of the disease [6]. These markers continue to be essential variables, as they guide management, indicate quality of life, progression, virological response to treatment, and disease prognosis [7-9].

There are several classifications of HIV disease, including the “Centers for Disease Control and Prevention” (CDC) “Disease Staging System” (revised in 1993) [10] and the “Revised Surveillance Case Definition for HIV Infection” (revised in 2014) [11]. Both are based on the clinical and immunological state of the patient, to know the stage in which he is. The second classification is intended primarily for public health surveillance of HIV infection at the population level and for research. These classifications provide an overview of the patient’s condition and direct their management.

In our country, statistical data show a slight decrease in the incidence and mortality from HIV [3], therefore, in theory, an improvement in the quality of medical care related to this infection is expected in Mexico.

One of the key points, in the quality of medical care for this disease, is to make an early diagnosis; The importance of this lies in that, providing treatment and comprehensive management to the patient, leads to improve the immune state and the quality of life of the same, reducing in turn, morbidity and mortality and the risk of contagion [9,12-19].

To meet this need, and others, the Outpatient Centers for Prevention and Care in AIDS and Sexually Transmitted Infections (CAPASITS) were established in Mexico. CAPASITS of the city of Chihuahua, assists in the prevention and care of patients with HIV and sexually transmitted infections, adding psychological and social work support to those affected and their families. Among these services, it also provides free antiretroviral treatment to people who are not within any health system [20].

As a result of the efforts and resources that have been used to eradicate HIV in Mexico and in the world, it is expected that patients will be diagnosed earlier each time, that is, they will have a higher CD4+ lymphocyte count and who are in a less advanced stage of the disease. For this reason, it is essential to evaluate whether an impact has been achieved in the early detection of affected patients, since information is lacking in Mexico, which contributes to optimizing the management of available resources.

With the objective of evaluating whether the patient is diagnosed in a better immune state, the present investigation was carried out, analyzing data from patients infected with HIV, who were treated by CAPASITS in the city of Chihuahua, from 2007 to 2016.

It is a retrospective and comparative study per year. The target population was the records of patients diagnosed with HIV infection enrolled from 2007 to 2016, at CAPASITS in the city of Chihuahua. The other inclusion criteria were: patients who had no previous treatment (naives), initial viral load greater than or equal to 50 copies/mm3, because with a lower load they may represent elite controllers or patients who did receive treatment but they denied it. The reviewed files were 578.

Data analysis was carried out with the Statistical Package for the Social Sciences (IBM-SPSS) software.

To assess the clinical and immunological status of patients at the time of admission to CAPASITS, the count of TCD4+ lymphocytes measured in number of TCD4+ lymphocytes/ mm3 of blood with BD FACS Canto II cytometer, the viral load at admission measured in number of copies of HIV/ mm3 of blood with Abbott m2000sp collection kit and stage of HIV infection.

Regarding the stage of the disease, the “Review of case definition for HIV surveillance”, developed by the CDC and the Council of State and Territorial Epidemiologists (CSTE) and updated in 2014, was used, which relates the TCD4+ cell count and clinical manifestations, because it is useful for research purposes [11].

The CD4+ lymphocyte count, viral load, and HIV infection category were compared at the time of admission of patients to CAPASITS, in the 10 years studied.

The project was submitted to the Research and Ethics Committee of the Faculty of Medicine of the Autonomous University of Chihuahua. This research was carried out in compliance with the regulations of the General Law of Health in Matters of Health Research, which stipulates respect for the dignity of the subject under study.

In the CAPASITS Chihuahua, 578 records were found of people who entered due to HIV infection, in the period 2007-2016, who met the inclusion criteria.

Most of the participants are male, corresponding to 75.61% of the study population. The most affected age range is 25 to 34 years, followed in order of frequency by the range of 35 to 44 years, in both sexes; the minority of patients are 55 years or older (Table 1).

About 50% of patients were diagnosed in stage 3 of the disease, this stage occurs more frequently as age increases. The participants of whom the CD4+ lymphocyte count was not present, and therefore remained in “unknown stage” were 5 patients.

Apparently, the average of CD4+ lymphocytes at patient admission per year shows an increase, and a decrease is observed in the percentage of patients diagnosed in stage 3 and the mean viral load at admission (Table 2, Figure 1). 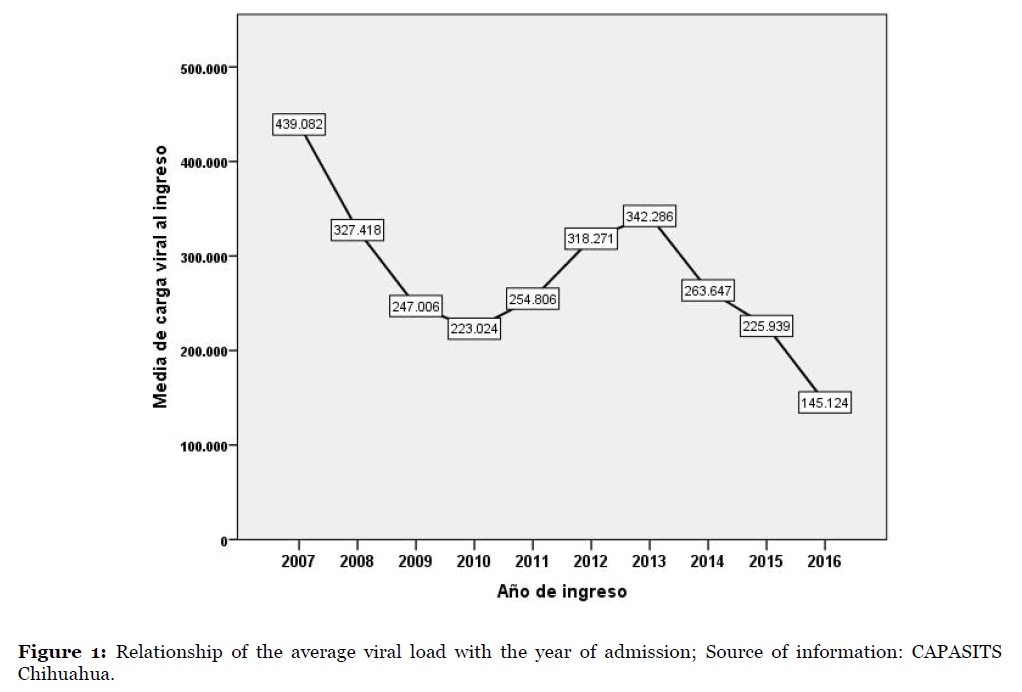 Table 2: Average of CD4+ lymphocytes and stage of infection per year..

However, when comparing the CD4+ lymphocyte count in the 10 years analyzed by ANOVA, it was observed that there was no significant difference with p=0.272, nor for the initial viral load with p=0.653, with a confidence level of 95% for both tests.

Likewise, the chi square test was performed to compare the stage of HIV infection, year by year, which showed that there was no significant difference, resulting in a p=0.466. It is also seen that in no year the average viral load was below 100,000/mm3 (Figure 1).

Of the participants in this research, 75.61% are men, similar to the preliminary information as of March 31, 2018 revealed by CENSIDA. This report mentions that nationwide, 82.13% of those affected are male [3].

HIV is more frequent in young people, being the stage of life in which there is generally greater productivity, which has an impact not only in the social sphere, but also in the workplace, education and family [21]. This was not the exception in the patients included in the present analysis, the majority being in the age range that encompasses 25 to 34 years of age.

A high percentage of affected women is diagnosed at an early age, and reproductive, which is relevant, because they are at risk of infecting the product, if they are pregnant. Even so, the CENSIDA report shows that from 2007 to 2016 the incidence of HIV cases in women has a negative slope [3].

The services offered in CAPASITS are free [20], therefore, it would be expected that people would go to receive medical attention, be diagnosed and treated in a timely manner, and that over the 10 years an Statistically significant improvement in the clinical and immunological status of the patients at the time of admission, but this was not the case in any of the 3 variables that were compared (CD4+ lymphocyte count, viral load, and stage of HIV infection). The fact that there are no differences suggests that more emphasis is needed on prevention and health promotion.

In contrast to what was expected, regarding the initial CD4+ lymphocyte count, it was observed that during the 10 years analyzed there was no improvement, that is, the patients came to receive medical attention with the same immune deterioration. Similar to this is the report of an investigation carried out in Brazil, which studied the CD4+ cell count in 1801 patients older than 18 years, where they also did not observe improvement in terms of an earlier diagnosis in 13 years [22].

A CDC report, which analyzed HIV in the United States in the period 2010-2014, mentions that the percentage of patients diagnosed with stage 3 HIV decreased in those 5 years, but for this inference they only considered the decrease in said percentage (from 25.1% to 23.1%), that is, the appropriate statistical tests were not performed to be able to state that there was a statistically significant improvement. In comparison, in the results of the CAPASITS Chihuahua 50% attended stage 3. In the same report it is mentioned that in 2014, 21.2% of the patients were in an unknown stage, unlike the CAPASITS, which was only 0, 9% [24].

A study that analyzed patients from sub-Saharan African countries, mentions that the average of CD4+ lymphocytes at patient admission increased from 238 CD4+ lymphocytes to 286 from 2006 to 2011 [27].

The fact that patients come in late stages of the disease, may be one of the factors for which it has not been possible to reduce AIDS mortality in Mexico as expected [28], because there was a decrease in it, from 4.41 to 3.82 per 100,000 inhabitants in 15 years [3], despite the fact that in 2003 universal access to antiretroviral treatment was established [29].

The approach to HIV implies the need for a health system that considers all the determinants that impact on the quality of care. Therefore, better access to services, diagnosis and treatment is required; see the entity not only from the biologist point of view.

To date, the situations of admission to treatment have not improved and our population goes to receive medical attention in worse conditions than in other parts of the world.

CAPASITS is a comprehensive care system for patients affected by HIV and other sexually transmitted diseases, covering the needs of the state of Chihuahua.

Research is required to delve into the determining factors for the improvement of early diagnosis and treatment, to direct resources in those areas and a greater focus on areas such as prevention and health promotion to decrease both the incidence and the presentation of more advanced stages. of the illness.