Copyright: © 2021 Prachi, et al. This is an open-access article distributed under the terms of the Creative Commons Attribution License, which permits unrestricted use, distribution, and reproduction in any medium, provided the original author and source are credited.

Primary small cell carcinoma of the bladder is very rare pathological entity, follows an aggressive course and carries poor prognosis. The literature carrying these articles are scarce and due to which it poses a diagnostic challenge to the radiologist and urologists. Herein, we present a case of small cell carcinoma of urinary bladder in a 75-year-old male patient initially reported as poorly differentiated urothelial carcinoma on transurethral resection of bladder tumor specimen to emphasize its rarity as well as the role of immunohistochemistry to differentiate between the two.

Due to rarity of the tumor, its pathogenesis is unknown. Urothelial cell origin, stem cell theory and malignant transformation of neuroendocrine cell of urinary bladder lay the hypothesis of its pathogenesis [1].

We hereby report a case of small cell carcinoma of urinary bladder in a 75-year-old male patient initially reported as poorly differentiated urothelial carcinoma on transurethral resection of bladder tumor specimen to emphasize its rarity as well as the role of immunohistochemistry to differentiate between the two.

A 75-year-old male patient presented with gross haematuria and pelvic pain since a month. He is a chronic smoker with 40-pack year index. His family history is insignificant. Ultrasonography showed 2 × 2 cm broad based solid heteroechoic mass along the left lateral wall of urinary bladder.

His urine examination revealed presence of occult blood with microscopic examination of 3-4 RBC/ HPF. Other laboratory parameters were within normal limits. Following which he underwent transurethral resection of the bladder tumour. Grossly, we received multiple grey white to grey brown soft tissue pieces measuring 2 × 1.5 × 1.0 cm. entirely processed in one block. On pathological examination with haematoxylin and eosin staining demonstrated sheets and nests of loosely cohesive small round to oval cells with hyperchromatic coarsely granular nuclear chromatin and scanty cytoplasm invading lamina propria without muscle invasion. Occasional mitotic activity is seen and was reported as High grade poorly differentiated carcinoma with small cell features (Figures 1A and 1B). Additional pathological findings were marked chronic cystitis with cystitis et glandularis with urothelial carcinoma in situ features. On immunohistochemistry panel, the tumour cells were immunoreactive for CK7 (Figure 1C), CD56 (Figure 1D), synaptophysin (Figure 1E) Chromogranin and Ki67 (Figure 1F) and nonimmunoreactive for CK20, HMWCK, uroplakin and GATA-3. Morphologic and immunohistochemistry features were consistent with small cell neuroendocrine carcinoma with >95% of neuroendocrine component. The patient was planned for radical cystectomy, for which he refused after being informed on the associated morbidity risk and eventually succumbed to the disease 2 months after the diagnosis. 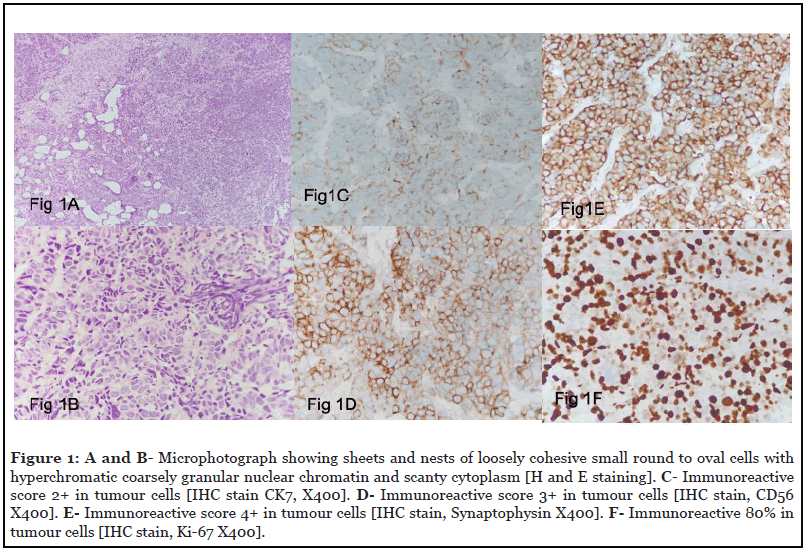 Neuroendocrine carcinoma presumably arises from the epithelium lined organs like respiratory tract and gastrointestinal organs, urinary bladder being the rarest site of it.

Most common symptom of presentation is haematuria in 88% of cases. Other symptoms include local irritation, pelvic pain and urinary obstruction. These patients rarely have distant metastasis or paraneoplastic syndrome [3].

On histology carcinoma of lung also resembles small cell carcinoma of urinary bladder, many a times. Hence immunohistochemistry aids in distinguishing them from various other differential diagnosis like high- grade urothelial carcinoma, lymphoma, carcinoid and lymphoepithelial like carcinoma from lung [4].

The IHC markers used are Chromogranin, Synaptophysin, CD56, and NSE for neuroendocrine tumours.

The mainstay of management of Neuroendocrine carcinoma is not well- defined. Therapeutic modalities may vary and it includes transuretheral resection, cystectomy, radiation therapy and systemic chemotherapy. If the tumour is limited to the bladder, then surgical resection alone is likely and in combination with adjuvant or neoadjuvant chemotherapy is beneficial [5].

As the etiology and natural history of small cell carcinoma of the urinary bladder is not well- known, hence its challenging to both the pathologist and urologists for its diagnosis and treatment. Its diagnosed presumably by histopathological and immunohistochemical characteristics. Multimodal approach to treatment is recommended and carries poor prognosis. Long term up follow-up is warranted as there are chances of recurrences and distant metastasis.