Copyright: © 2021 Chidawanyika T, et al. This is an open-access article distributed under the terms of the Creative Commons Attribution License, which permits unrestricted use, distribution, and reproduction in any medium, provided the original author and source are credited.

Hydrogen peroxide (H2O2) is an important intra- and extra-cellular signaling molecule that can determine cell fate. At low concentrations, H2O2 plays roles in proliferation, immunity, and metabolism. Cellular exposure to higher non-physiologic concentrations of H2O2 can result in oxidative stress. If the stress is not alleviated, cell death can ensue. In the past, few studies were done to study the key mediators of H2O2-induced cell death. The advancement of genetic screening technology with CRISPR/ Cas9 tools has allowed for in depth genome-wide studies to identify key mediators in different cell types. Here, we briefly explore the role of H2O2 in the cell and the essential mediators of H2O2-induced cell death with a focus on riboflavin, an unexpected essential mediator of H2O2-induced cell death.

H2O2 Exposure as a Form of Oxidative Stress

Sies first described oxidative stress in 1985 as the intracellular process that occurs when the balance between reactive oxygen species (ROS) and the cellular antioxidant defense system is perturbed, and the levels of the ROS exceed cellular homeostatic concentrations [1-3]. ROS such as hydrogen peroxide (H2O2), superoxide radical (O2•-), and hydroxyl radical (OH•) are chemically reactive with various molecules in cells such as DNA, proteins, lipids, and sugars [4,5]. Among the known ROS, H2O2 is thought to be one of the less reactive and more stable species, and this quality allows H2O2 to behave as an important intra- and inter-cellular signaling molecule, and as a cell fate determinant [6]. At physiologic concentrations, H2O2 influences cellular processes including differentiation, proliferation, metabolism, and immunity [6]. However, when H2O2 levels increase beyond homeostatic concentrations, oxidative stress occurs and if it is not alleviated through antioxidant responses, cell death can occur [6].

Antioxidant responses are composed of complex signaling pathways that can be transcriptionally regulated by redox-sensitive transcription factors such as Nrf2, a master regulator of antioxidant response in cells [7]. Under normal conditions, Nrf2 is bound to kelch-like ECH associated protein 1 (KEAP1) in the cytoplasm [8]. KEAP1 is an adaptor of Cul3-based E3 ubiquitin ligase and therefore, it targets Nrf2 for proteasomal degradation [9]. During oxidative stress, the cysteine residues on KEAP1 are oxidized and Nrf2 is released from its association with KEAP1 [8,9]. Nrf2 then translocates to the nucleus, where it binds to the antioxidant response element (ARE) to regulate a plethora of genes (almost 200 genes) that are involved in cellular defense against oxidative stress [9]. Some of the activated proteins that are involved in reducing H2O2 to H2O and O2 include catalase, peroxiredoxins, and glutathione peroxidases (GPXs) [9].

Antioxidants can also exist in the form of vitamins such as vitamin C, vitamin E, carotenoids, and riboflavin [10]. In the case of riboflavin, this vitamin has been shown to have a protective effect against lipid peroxidation and tissue reperfusion injury, both of which are due to oxidative stress [10]. The mechanism of action of this protection has been shown to be through riboflavin’s role in the glutathione redox cycle, and through the conversion of riboflavin from its reduced form to its oxidized form during oxidative stress [10]. If a cell can increase its antioxidant capacity, homeostasis will be restored and the cell will survive. However, if the antioxidant defense systems fail, the cell will die.

H2O2 has been found to cause cell death through apoptosis, autophagy, necrosis, and ferroptosis [11-15]. Cell type and the severity of the oxidative stress to which a cell is exposed influences the cell death modality employed [11-13]. Hence, the concentration or duration of exposure of a cell type to H2O2 can also affect the mechanism of cell death. Caspase inactivation due to oxidative stress has been implicated as the reason why H2O2-induced cell death switches from apoptosis to other cell death modalities [16].

The use of CRISPR/Cas9-based genetic screens has advanced our biological knowledge and understanding of how exposure to extracellular H2O2 causes death in different cell types. It is important to note that screening parameters, including severity of exposure to H2O2 and cell type, vary for different screens. This factor not only affects the cell death modality employed by the cells, but it also affects the nature of the identified mediators of H2O2-induced cell death. Interestingly, the mediators have included genes involved in redox biology, riboflavin metabolism, iron homeostasis, vesicle trafficking, and the peroxisomal import pathway [17,18]. Here, we briefly discuss some of the mediators that are involved in redox biology, namely cytochrome P450 reductase (POR), retinol saturase (RETSAT), and KEAP1 [17,18]. The mediators involved in riboflavin metabolism, namely riboflavin kinase (RFK), flavin adenine dinucleotide synthetase 1 (FAD synthase), and SLC52A2 which is a riboflavin transporter with the highest affinity for riboflavin, are discussed in more depth [17,18]. The mechanism of cell death employed by POR, RETSAT, KEAP1 and SLC52A2 in HAP1 cells is irondependent, suggesting that these proteins mediate H2O2-induced cell death through ferroptosis in HAP1 cells [18]. It is important to note that these same proteins may mediate H2O2-induced cell death in other cell types through other mechanisms of cell death such as apoptosis.

POR, RETSAT, and KEAP1 are involved in redox biology, and they have been identified and validated as essential mediators of cell death in multiple independent screens against H2O2. POR was first identified for its role in oxidative stress-induced cell death in a paraquat CRISPR/ Cas9 screen in Jurkat cells [19]. It’s role in sensitization of cells to ROS-induced cell death, specifically H2O2, was later confirmed in CRISPR/Cas9 screens in K562 cells, HeLa cells, and in HAP1 cells [17]. In NIH/3T3 cells, a mouse embryonic fibroblast cell line, RETSAT was initially identified as a mediator of H2O2-induced cell death using an RNAi-based genetic screen [20,21]. CRISPR/Cas9 genome wide screens in human cell lines, K562 cells, HeLa cells, and HAP1 cells, confirmed the importance of RETSAT as an essential mediator of H2O2-induced cell death in human cell lines [17]. As an inhibitor of Nrf2 antioxidant activity, it is not surprising that KEAP1 was identified in CRISPR/ Cas9 screens in K562, HeLa, and HAP1 cells [17,18].

The identification of mediators involved in riboflavin metabolism as being involved in H2O2-induced cell death is of particular interest since historically, riboflavin has been regarded as an antioxidant, rather than an agent that promotes oxidative stress [10]. The screens in K652 and HeLa cells identified RFK and FAD synthase, while the screen in HAP1 cells identified SLC52A2 [17,18]. The identification of distinct mediators that are involved in riboflavin metabolism in the three screens is likely due to the use of different screening conditions with varying H2O2 concentrations, as well as different cell types. In the screens against K652 cells and HeLa cells, H2O2 concentrations were based on the concentration that resulted in survival of 50% of the cells [17]. However, in the screen against HAP1 cells, H2O2 concentrations were based on the concentration that resulted in survival of less than 1% of the cells [18]. Of note, the fact that riboflavin mediators were identified in three distinct screens with different conditions, shows the importance of riboflavin in H2O2-induced cell death. This importance was also highlighted when SLC52A2 knockout cells and HAP1 cells that were grown in riboflavin-depleted media showed resistance to H2O2-induced cell death, while SLC52A2 competent cells and cells grown in riboflavincontaining media did not survive H2O2 treatment [18].

Riboflavin (vitamin B2) is important for normal cellular function. Riboflavin enters cells through riboflavin transporters (SLC52A1, SLC52A2, or SLC52A3) and once in the cell, riboflavin kinase (RFK) converts riboflavin to flavin mononucleotide (FMN), which is then converted to flavin adenine dinucleotide (FAD) by FAD synthase [22-24]. FMN and FAD are the metabolically active forms of riboflavin, and they are important cofactors for many flavoproteins such as POR and RETSAT [25,26]. These flavoproteins are involved in many cellular processes such as energy metabolism, redox biology, DNA repair, and chromatin remodeling (Figure 1) [27]. Riboflavin’s known role as an antioxidant has favored its use as a protective agent against oxidative stress, particularly since FAD is an important cofactor for glutathione reductase which is a key cellular antioxidant [28]. Recent work from CRISPR/ Cas9-based screens in K562, HeLa, and HAP1 cells, however, has shown that riboflavin has a pro-oxidant and cytotoxic role in oxidative stress induced by H2O2 [17]. 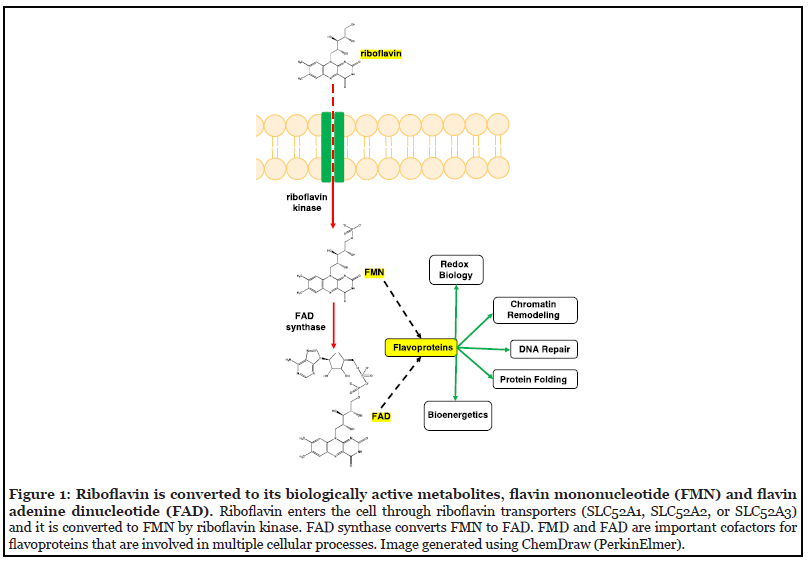 Through fluorescence-based experiments in HAP1 cells, riboflavin was shown to mediate H2O2 entry into HAP1 cells [18]. This role in regulation of H2O2 cell entry is a potential mechanism of action for riboflavin in H2O2- induced cell death. In riboflavin-depleted media, H2O2 cell entry into HAP1 cells was significantly less than in cells grown in riboflavin-competent media [18]. Without riboflavin, H2O2 would not be able to have intracellular access in HAP1 cells [18]. H2O2 cell entry is known to be mediated by a group of integral membrane proteins called aquaporins [29,30]. Aquaporins also mediate water, glycerol, and urea transport across cell membranes [31]. Aquaporin-based transport can therefore be evaluated by monitoring changes in cellular volume as a result of osmotic stress [31]. Osmotic stress experiments showed that volume regulation during osmotic stress depends on riboflavin in HAP1 cells, suggesting that riboflavin’s regulation of H2O2 cell entry is likely through interactions with an aquaporin [18]. This hypothesis is supported by the fact that AQP3 was identified as a mediator of H2O2- induced cell death in the screens in K562 and HeLa cells [17]. Further experimentation would be necessary to explore and confirm the proposed relationship between riboflavin, AQP3, and H2O2.

Interestingly, fluorescence-based experiments in retinal pigment epithelium and HEK293 cells did not show riboflavin-dependent H2O2 cell entry [18], suggesting that riboflavin’s function in H2O2 cell entry is cell type specific. HAP1 cells are leukocytes that were derived from KBM- 7 cells, which were isolated from a patient with chronic myelogenous leukemia (CML) in blast crisis [32,33]. When leukocytes are in riboflavin-deficient environments, their phagocytic activity decreases [34]. After leukocytes phagocytose microbes, the respiratory burst which can use H2O2, kills the microbes [35-37]. One potential reason why H2O2 cell entry is riboflavin-dependent in HAP1 cells is that these leukocytes use the riboflavin status of their environment as a measure of their own energy levels, and therefore of their ability to participate in the respiratory burst. If riboflavin levels are adequate, microbe phagocytosis can occur, H2O2 is allowed into the cell, and the respiratory burst can proceed. Riboflavin-based experimentation in other cells lines will be necessary to explore this hypothesis further.