Copyright: © 2021 NAKAMURA M, et al. This is an open-access article distributed under the terms of the Creative Commons Attribution License, which permits unrestricted use, distribution, and reproduction in any medium, provided the original author and source are credited.

Objective: The purpose of this study is to investigate the finger functions while accomplishing the active operation of using a prismatic object. We measured each finger pressure toward the object when the center of gravity changes the position toward distal, proximal, thumb side and finger side.

Method: The Maximal Voluntary Prehension Power (MVPP) was measured for 10 female volunteers respectively. Also, the finger pressure when changing the positions of center of gravity was also measured. The loads were set at 200 g and 400 g, and were suspended at five positions. The fingers pressures were measured over all trials and the %MVPP was calculated and analyzed.

We grasp and manipulate various types of objects during activities of daily living. To explain how we do this in a stable manner, a neural mechanism has been proposed that involves judging the position of the object and its characteristics (e.g., size, shape, material, and weight), executing the motor program based on sensory information, and feeding back information on whether the motions were executed properly [1-4]. Based on the notion that adjusting pinch force is essential for smoothly executing intended movements, we previously examined the precision of adjustments in pinch force made during tasks, using the standard deviation in error in relation to the target object as an index, and we revealed characteristics of active adjustment: the characteristic (i.e., speed) of the object and the point at which the increase and decrease of the force was switched affected the precision of the adjustment [5].

The purpose of this study was to reveal how digits respond, and consequently how the digit force distribution changes, when the center of gravity of the grasped object moves vertically and horizontally. This happens in real life when grasping an object containing a fluid, and it requires complex manipulation. We used the digit force output rate (proportion of the digit force measured to maximum digit force) to examine functional roles of the fingers.

The participants were 10 healthy female adults (mean age, 22.1 ± 1.2 years). All were right-handed with a mean Edinburgh Handedness Inventory score of 97.7 ± 4.85. None had motor or sensory function impairment in the upper limbs or a history of neuromuscular disease or orthopedic surgery in the forearms or digits. The explanation of the study was provided to participants in writing, and informed consent was obtained before commencing the study. This study was approved by the Ethics Committee of Sapporo Medical University.

The object previously used by Nakamura et al for a prehension experiment, an H-shaped object made of acrylic board [22], was modified for use in this study. The size of the side panel was 50 mm × 100 mm × 5 mm. To eliminate possible contact with the digits and consequent interference with the adjustment of digit force, 4 corners of the panels were cut off to obtain octagonal panels. A sensor (Kyowa Electronic Instruments Co., Ltd, Tokyo, Japan) for detecting the timing and position of weight load was placed in the center of the panel. In order to change the center of gravity, hooks were attached to the center of the panel in 5 locations: center, and midpoints of the top, bottom, right, and left sides (Figure 1). The following miniature pressure sensors (Kyowa Electronic Instruments Co., Ltd), which were previously tested and calibrated for use for digit force measurement, were attached to the object: PS-10KAM195 (rated capacity, 10.20 kgf/cm2; rated output, 1 mV/V) for the thumb and PS-5KC (rated capacity, 5.099 kgf/cm2; rated output, 1 mV/V) for other digits. 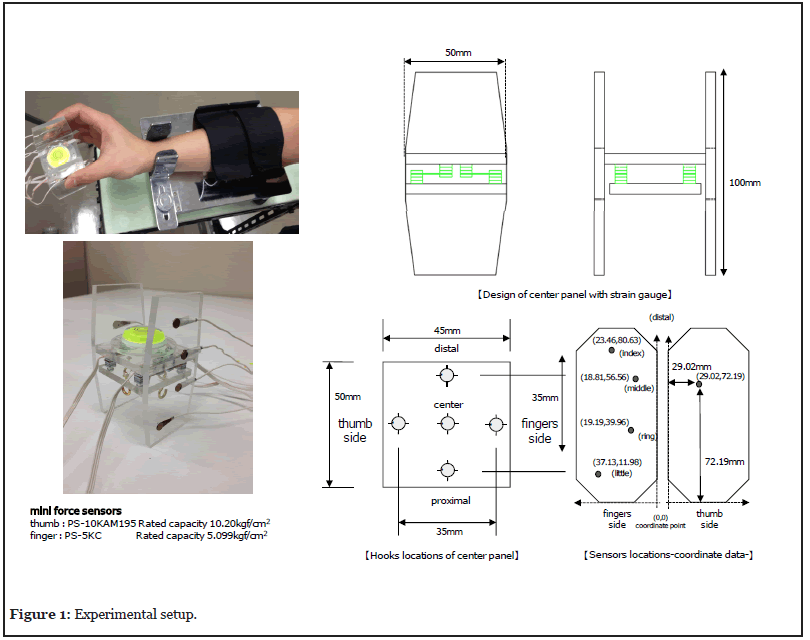 The positions of the sensors were determined as described previously [22]. Briefly, the mean coordinate of the center of contact of the distal pulp of each digit was obtained in a natural grasping position. The errors from the mean coordinate were confirmed to be within the sensing surface of the sensor (diameter, 6 mm). The lengths of the participants’ digits in this study fell within the range of the mean ± SD of the participants in the previous study [22]. The total weight of the model object was 116.7 g.

The length of the participants’ hands and fingers were examined. The pulps of the right digits were wiped thoroughly with alcohol swabs. The participants sat on a stool and the forearm was placed in a neutral position in a fixation stand. The maximum voluntary pinch power (MVPP) of each digit was measured as the participant grasped the object on the table in front of them. Measurements were taken 3 times. After adequate rest time to prevent tiredness, experiments were completed using two weight loads (200 g and 400 g) and different centers of gravity.

Before starting the experiment, participants practiced grasping the object with a 200-g and a 400-g weight attached to each of the 5 positions of the center of gravity. Then, the 5 positions were tested, in random order, in one experimental trial that was repeated 3 times with each participant. The experiment using the 200-g weight was performed before the experiment using the 400-g weight to eliminate the effect of the change in safety margin. Adequate rest time was allowed between the measurements to eliminate the effect of fatigue.

The object with weight attached was held stationary in a horizontal position in air for 10 s, and digit forces were recorded using a vital sign recording program (VitalRecorder; Kissei Comtec Co., Ltd., Nagano, Japan) at a sampling frequency of 1 kHz (Figure 1).

The highest of the 3 MVPP measurements taken was analyzed in this study for %MVPP calculation. To analyze digit force with a change in the object’s center of gravity, the peak force detected in a 0-2000 msec period after weight load were obtained (initial peak force). Then, the mean force of each digit when the object was held at a horizontal position (i.e., the holding phase 3000-5000 msec after weight load) was calculated. The holding phase varied in previous studies, such as 10000-15000 msec in a study by Johannson et al. [2], 5000-7000 msec by Kinoshita et al. [8], and 2000-5000 msec by Yao et al. [16]. The present study used a holding phase of 3000-5000 msec to obtain the mean force of each digit (Figure 2) because the mean time to stable digit force exertion obtained from the randomly extracted data fell into a holding phase of 3000- 5000 msec, as reported recently. 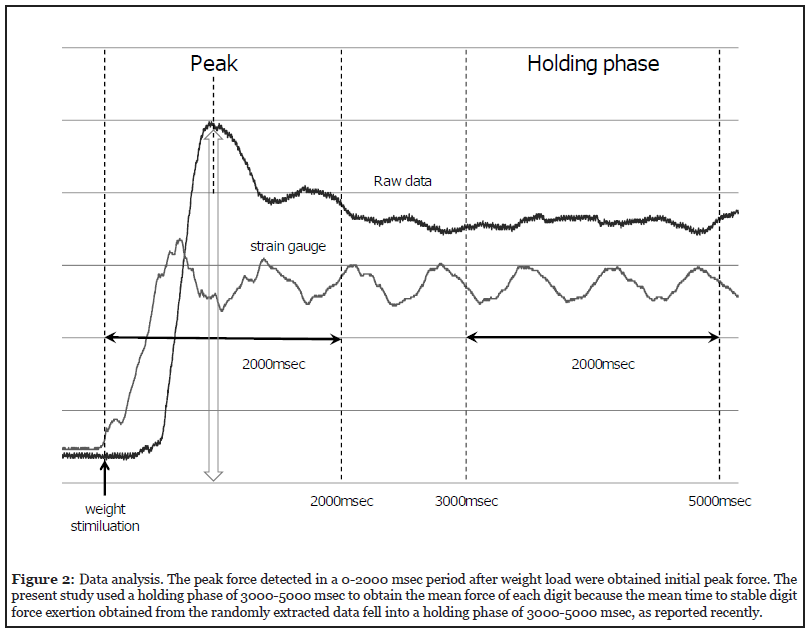 This study examined the initial peak force, and mean digit force and %MVPP in the holding phase. Previous studies calculated the proportion of force of each digit to the total force of all digits loaded on the object [8,15], but that approach does not account for differences in muscle strength and MVPP among the digits and so the contribution of small finger pressure during prehension would be low. However, we thought that that even if finger pressure were small, when the involvement of the finger is high, it may play an important role in the manipulation, and we therefore used %MVPP as an index of the involvement of each digit in manipulation. The initial peak force, the mean digit force in the holding phase, and proportion of these to MVPP (%MVPP) were compared among the digits, different points for the center of gravity, and presence/ absence of the information for the center of gravity using a one-way ANOVA. When significance was detected, multiple comparison was performed using the Tukey- Kramer test. A paired t-test was used to examine changes in digit force in response to the changes in the object’s center of gravity. Statistical analysis was performed using SPSS 12.0 for Windows, with statistical significance set at p<0.05.

Five-digit prehension: characteristics of the distribution of digit force; initial peak force with the center of gravity at the center of the grasped object 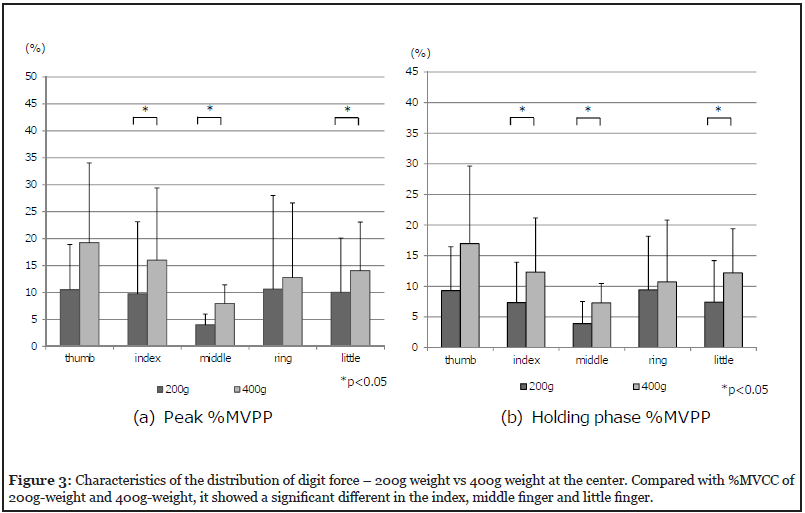 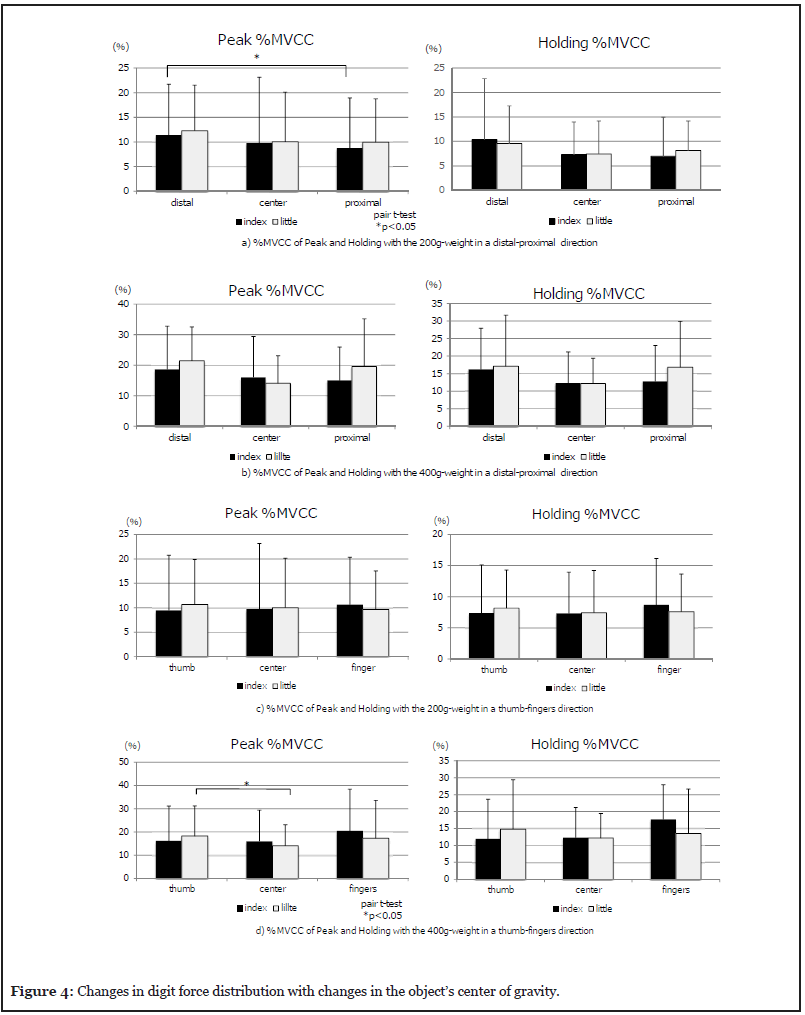 Increases in digit force and %MVPP were attributed to changes in weight load. When the timing of the initial peak force was compared, it was earliest for the index finger with the 200-g weight but for the little finger with the 400- g weight.

Five-digit prehension: characteristics of the distribution of digit force; in the holding phase with the center of gravity at the center of the grasped object

Both digit force and %MVPP values for all digits were higher when the weight was loaded at the distal position of the object, irrespective of the weight loaded. No marked difference in digit force or %MVPP was observed when the weight was loaded at the proximal position, but the involvement of the little finger tended to be more prominent than that of the ring finger. There were significant increases in digit force (p=0.026; t-test) and %MVPP (p=0.019) for the index finger when the object’s center of gravity was moved in a distal direction with the 200-g weight. When the 400-g weight was used, a significant difference was seen between the distal and center positions (p=0.029) for the little finger in response to change in the distal direction (Figure 4c).

This study examined changes in digit force that occur when the center of gravity of a grasped object changes to simulate the motion of fluid. We demonstrated that changes occur in the digit force distribution during 5-digit prehension when the object’s center of gravity changes from the center in a distal, proximal, thumb, or finger direction. The use of %MVPP as an index enables us to determine the actual degree of involvement of each digit in grasping and manipulating the object.

Taken together, the findings of this study suggest that the middle and ring fingers, which are located centrally among the digits, contribute to the fixation of spatial orientation and position, while the index and little fingers play a dominant role in active manipulation when the object’s center of the gravity changes. These findings are in good agreement with those of previous studies where the index and little fingers contributed to the generation of torque, and the middle and ring fingers exerted forces depending on the torque generated and weight load applied [11-13]. Given that the digit force and %MVPP of the little finger increased, this digit is likely involved in the generation of force against a downward sliding object, while the index finger is likely involved in directional manipulation of the object regardless of its weight.

Digit forces and %MVPP values of the index and little fingers tended to be lower in the holding phase than at the time of peak force. This may represent the condition of the holding phase where these digits, which have independent extensor muscle and greater manipulation ability than the other digits, were ready for manipulation function. Although responses to changes in an object’s center of gravity in a distal-proximal direction have not been well studied, the index and little fingers are likely to be involved in force adjustment and manipulation in response to such changes in all directions, while the middle and ring fingers are involved in responding to the disturbance load and maintaining the spatial orientation of the object.

The authors would like to give special thanks to all the participants and staff who facilitated in the data collection. This paper was supported by the Sapporo Medical University Graduate School of Health Sciences.

The authors report no conflicts of interest. The authors alone are responsible for the content and writing of paper.