Copyright: © 2018 Zenati L et al. This is an open-access article distributed under the terms of the Creative Commons Attribution License, which permits unrestricted use, distribution, and reproduction in any medium, provided the original author and source are credited.

Introduction: Axiography allows the three-dimensional study of condylar movements in the perspective of a diagnosis of cranio- mandibular dysfunctions and a real adjustment of the articulator. Can we do without an MRI magnetic resonance imaging examination and rely solely on axiographic plots in the diagnosis of CMD and can we systematize an axiographic mapping?

Materials and methods: This is a descriptive clinical study through which we treated 20 partial dentated and edentulous patients with signs and symptoms of TMJ disorders, the age group is 31 y old to which we have made axiographic plots, these have been superimposed with those of DUPAS in order to try to contribute to the systematization of an axiographic cartography.

Results and Discussion: The graphic recordings differ from one patient to another; the experience of the practitioner remains a major asset for the interpreters and consequently to make the positive diagnosis of the articular pathology. The value of the condylar slope was between 38° and 70°, the angle of Bennett is calculated according to the Hanau formula. We also noticed that the return movements do not necessarily end at the point of reference (arbitrary hinge axis).

Conclusion: Despite the absence of an axiographic mapping of condylar trajectories and pending further studies, axiography is of very significant diagnostic importance, indeed as and when it is used, the practitioner will master its rational use.

Axiography allows the three-dimensional study of condylar movements in the perspective of diagnosis of cranio-mandibular dysfunctions (CMD) and real adjustment of the semi-adaptable articulator.

Conceived by Cammpion in 1902, Robert Lee was responsible for updating this principle of study.

This technique, according to Cardonnet and Clauzade (1987), must be used as soon as a joint problem is suspected and is one of the means of choice for the differential diagnosis of temporomandibular disorders of articular origin, such as reducible dislocations, irreducible dislocations. Among the proposed methods for the recording of mandibular kinematics, the Lundeen [1,2] axiography developed by Slavicek represents a technically validated methodology for recording condylar displacements [3]. Axialized recording of condylar displacements eliminates the rotational movement to preserve only the translation movements. This recording allows the choice of the condylar slope to program the semi-adaptable articulator.

The comparative study of Frongia between the MRI examination and axiographic plots in the diagnosis of TMJ internal disturbances, did not find any different contradictory result hence it is a very interesting diagnostic tool at the same rank as the MRI examination, the latter is less used in the diagnosis of CMD because of the higher cost and the acquisition of images is in a static position of opening and closing mouth [4].

-The noise or the deviation at the mouth opening represents 30% to 50%.

-The limitation of mouth opening represents only 4% to 10%.

-Only 7% are sufficiently severe to require treatment.

CMD are of interest to both sexes regardless of age, with female pre-dominance and age range between 15-45 y old [2].

It is a descriptive clinical study carried out on 20 dented and edentulous partial patients whose age is 31 y, selected following the presence of the signs and symptoms of TMJ disorders (noise, algie, dyskinesia), the criteria of inclusion were the absence of prior orthodontic treatment or prosthetic device; all were subjected to a clinical examination completed by a mechanical axiography.

The data were collected through para-condylar flags which were subsequently examined for the equivalent of twenty plots.

The apparatus used is the Quick axis of the Fag firm which consists of a facial bow on its sides of the ear tips that are placed in the external auditory canals of the patient with a frontal bar on which attaches an occlusal splint intended for the lower arch, the latter will be filled with a high polyvinylsiloxane, taking care to position its stem parallel to the medial sagittal plane of the patient. A sagittal arch recording arm on which the record stylus and the tambour are fixed at the right and left paracondylar registration flags.

A facial bow with its nasal support and elasticized back strap

The frontal bar should be parallel to the transverse face of the face bow in the horizontal and frontal plane.

The recording stylus is fixed on the locator arm in contact with the corresponding recording area at the intersection of the two horizontal and frontal axes, thus materializing the arbitrary hinge axis: this is the point ‘0’.

The help of a dental assistant is essential to correctly place the axiograph on the patient; the total duration of this operation is about 10 min.

The patient was subsequently asked to perform opening and closing movements and a propulsion movement from the centred position, having previously interposed articulated paper between the stylus and the paracondylian flag, a plot will be obtained at the end of this phase which will be analyzed later (Figures 1-4). 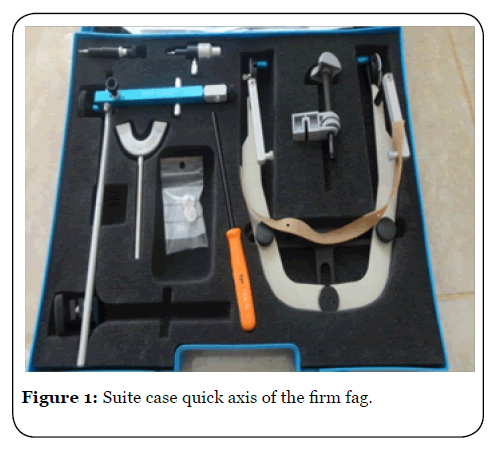 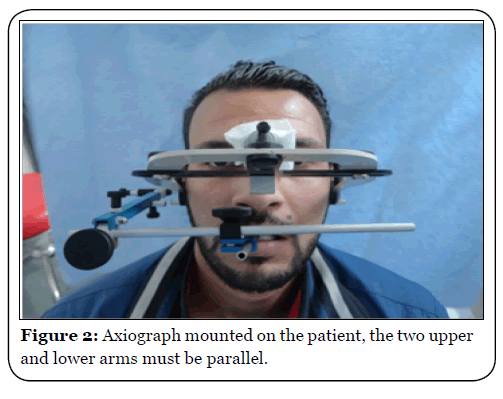 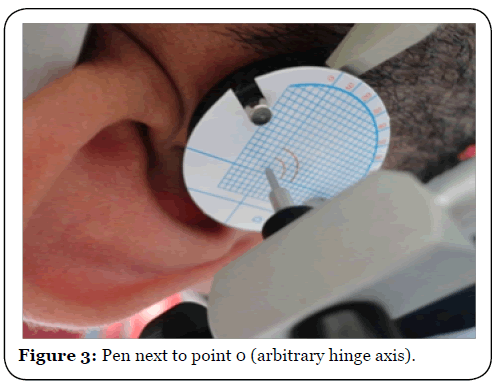 Axiography is a non-invasive para-clinical examination of the mandibular kinematics and more precisely of condylar displacements thus allowing the real programming of the posterior determinants of the semiadaptable articulator.

It was Slavicek [3] who showed interest in studying the pathology of the disc joint. The slope of the tracings relative to the reference axio-orbital plane (franking plane) of our study is between 38° and 70° calculated from the first 5 millimetres of condylar excursion, the angle of Bennett is calculated according to the Hannau formula B=h/8+12. We also noticed that the return movements do not necessarily end at the reference point (hinge axis) (Figures 5-12). 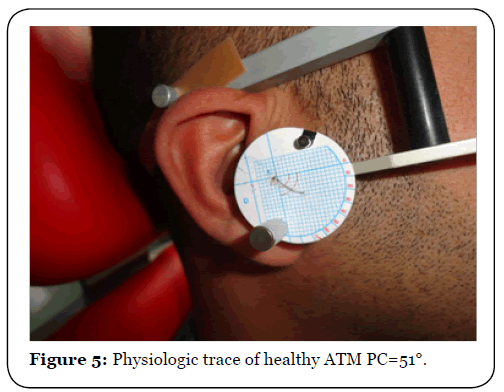 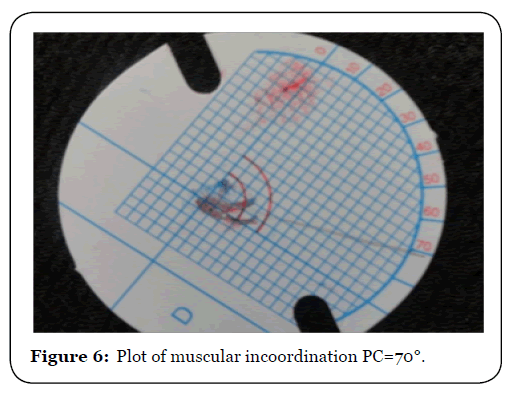 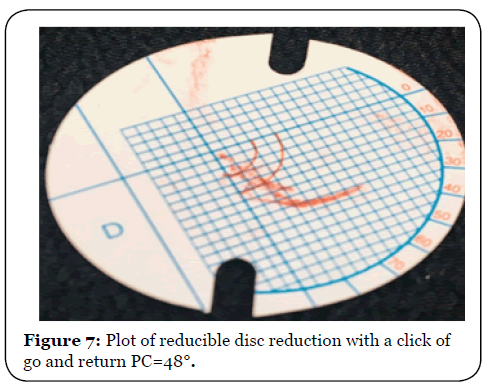 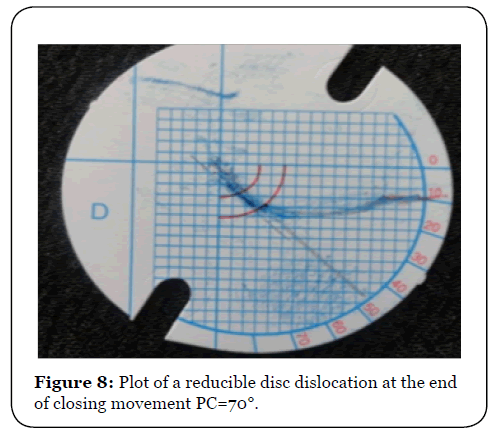 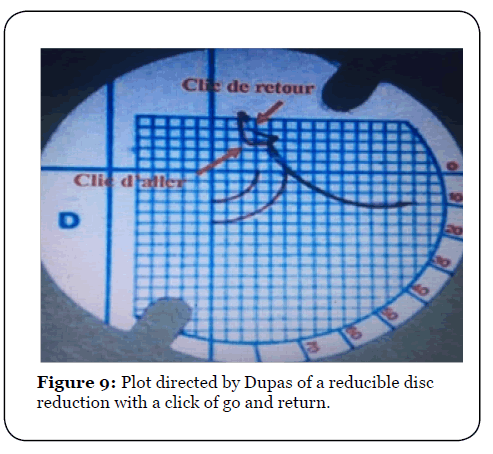 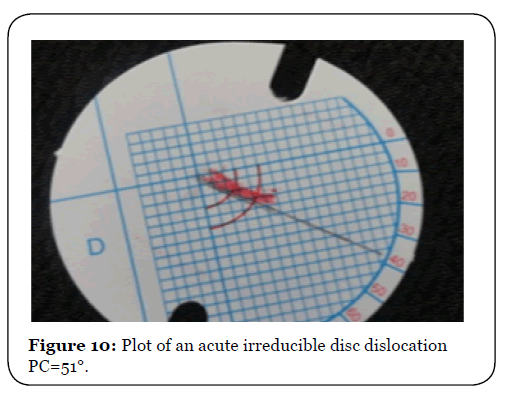 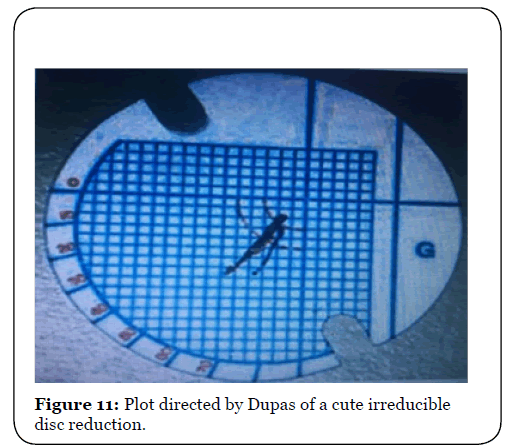 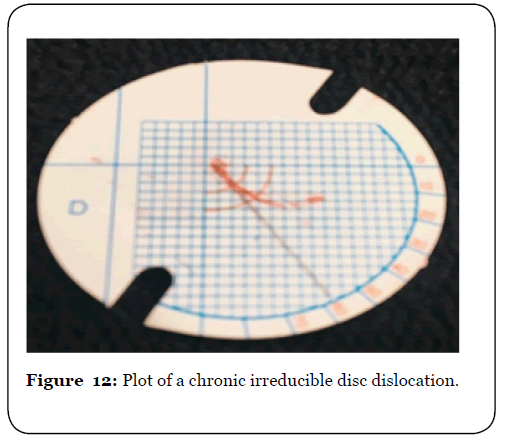 -Arbitrary localization of the hinge axis.

- Three-dimensional visualization of the recordings.

-Calculating the angle of the condylar trajectory and the angle of Bennett, it is enough to draw a tangent at the most declivitous point of the recording.

-Is the only way available to the practitioner to record mandibular kinematics?

-Descriptive of the different traces obtained.

The criteria for interpreting routes are based on

-Their amplitudes: important, average or reduced.

-Reproducibility: partial or total superposition in the same patient

-Their mode: symmetry or not on the right side with the left side and on the same patient.

-The comparison is made between the so-called physiological trace taken into consideration from the beginning of the study and pathological traces obtained.

The physiological trace is very rare and is characterized by

-Easy locating of the real hinge axis, the patient comes back at the end of closing movement,

-The plot is concave upwards

-The traces are repetitive and superimpose.

-The movements are harmonious, regular, without stop or jump.

-At the end of the movement the plot is net without loop (Figure 5).

In the case of ligament distension: The line is often split and overloaded with small jerky movements.

Reducible disc dislocation: Different expressions of this articular pathology are visualized by the axiography whence its diagnostic interest, the cracking can be at the beginning, middle or the end of the movement of opening/closing mouth with a click of go and back (the earlier the cracking is, the better the prognosis), the hinge axis is unstable because it is located in the bilaminary zone (Figures 7 and 8).

Chronic irreducible disc dislocation: The axiographic plot may resemble the physiological pattern, except that the concavity tends to disappear, in this case the value of the angle of the condylar slope tends to decrease (Figure 12).

Once the positive diagnosis is made, a treatment plan is planned to treat the musculo-articular pathology.

The study of the plots obtained (shape, angulations) are consistent with those that exist in the literature, the work of Dupas performed jointly on the mechanical Axiograph Quick axis and SAM [5-13] (Figures 9 and 11).

Despite the absence of an axiographic mapping of condylar trajectories and pending further studies, axiography is of very significant diagnostic importance, indeed, as and when it is used, the practitioner will master its rational use.

The authors do not declare any conflict of interest in relation to this article.