The Archives of Psychiatry 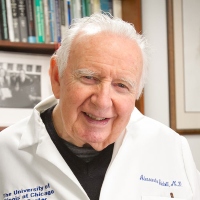 Alessandro Guidotti currently working as a Scientific Director of the Psychiatric Institute, and Professor of Psychiatry and Biochemistry at the Department of Psychiatry, University of Illinois at Chicago from 1996. Alessandro Guidotti worked as M.D. at University of Florence, Italy in 1961. Visiting Scientist at Department of Pharmacology, Oxford University, United Kingdom in 1966. Professor of Pharmacology, Department of Pharmacology, University of Florence, Italy from 1968-70. Visiting Associate at Laboratory of Preclinical Pharmacology, NIMH, St Elizabeths Hospital, Washington, DC from 1970-72. As Acting Chief from 1973-75, and as Chief from1975-85. Section on Neuroendocrinology, Laboratory of Preclinical Pharmacology, NIMH, St Elizabeths Hospital, Washington DC. Deputy Director at FIDIA-Georgetown Institute for the Neurosciences, Georgetown University, Washington DC from 1985-94. Director at Neuroscience Training Program, Georgetown University from 1992-94. Acting Director at Center for Neuropharmacology, Nathan S. Kline Institute for Psychiatric Research, Orangeburg, NY from 1994-96. Professor at Environmental Medicine, NYU Medical Center from 1995-96. Commissioned Lieutenant at Italian Medical Corp from 1961-62. Fellowship at National Italian Research Council from 1964-65. Privat Docent in Pharmacology, Italian Ministry of Education in 1968. Visiting Scientist at NIMH from 1970-72. Member of the American Society for Pharmacology and Experimental Therapy in 1973. Society for Neuroscience in 1973. International Society for Psychoneuroendocrinology in 1974. International Society of Neurochemistry in 1980. American College of Neuropsychopharmacology in 1989. Collegium Internationale Neuro-Psychopharmacologicum in 1989. American Society of Neurochemistry in 1993, Distinguished Professors, University of Illinois at Chicago, 2011.

Guidotti’s outstanding research record ranges from the report that benzodiazepines, allosterically acting at specific GABAa receptor sites, enhance GABA’s gating of Cl channels dating back to the 1970′s up to his recent pioneer studies on the role of reelin in human cortex and on demethylation of promoters expressed in GABAergic neurons as a potential mechanism of antipsychotic action. Molecular mechanisms of cognitive functions.