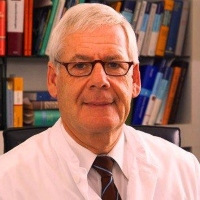 Dr. Teschke was born on April 15, 1944 in Gera, a town in Eastern Germany, and studied medicine at the universities of Munich and Marburg, where he received his M.D. and finished his inaugural thesis. He is an internist with subspecialty in gastroenterology and hepatology and professor of Medicine at the Heinrich Heine University of Düsseldorf/ Germany.

His scientific and clinical interest in hepatotoxicity started as resident at the Department of Pathology, University of Marburg/Germany, with following focus on alcoholic liver disease and biochemical studies as resident at the Bronx VA Hospital/Mount Sinai Hospital in New York with Professor Charles S. Lieber during 1972-1975, appreciating living in NYC and excellent local research conditions. More specifically, here he solubilized the hepatic microsomal ethanol oxidizing system and isolated it from the other alcohol metabolizing enzymes alcohol dehydrogenase and catalase by DEAE column chromatography. Other studies included the area of cytochrome P450 and various microsomal enzymes.

Back in Germany, he had positions as resident physician and professor at the Department of Medicine, section of Gastroenterology, Hepatology, and infection at the Heinrich Heine University in Düsseldorf/ Germany. Here he finished his habilitation thesis and received a highly prized university award for his outstanding research. He undertook clinical and experimental studies focusing on hepatotoxicity by alcohol, hydrocarbons, drugs, and herbs.